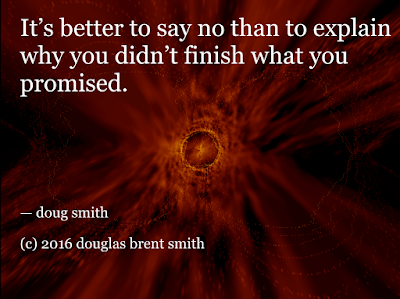 Do you have a hard time saying no?

It's better to say no than to explain why you didn't finish what you promised.

And when we say yes, it sounds like a promise.

Prioritize. Consider the work involved. Understand where you can make your biggest impact. Focus on the goals that get you to your mission and de-prioritize anything that does not. You will meet with resistance. You will get some push-back. But before you make that promise -- think about the option of saying no.

Often, it's not as big a deal as we feared because someone else can step in and do it. But once we take it on, it's ours.

Say no, rather than disappoint. It's what they would want.