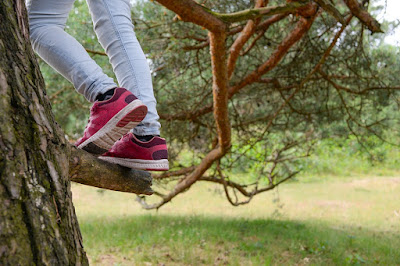 Twitter can be fun sometimes because you can follow famous people and even respond to their musings. Sometimes, they might even respond to your response, somehow validating an otherwise humble existence.

In teaching for decades I've often asked as a warm-up question "what famous person have you met?" and I was initially surprised at how many people have actually met a famous person. Nearly everyone in nearly every room has met or encountered at least one famous person. We're all so close to connection that it's wonderful.

One of the famous people I've met (who no doubt will not remember me) is the writer and producer Gennifer Hutchison. We met at a wedding in California. She's closely associated with the TV show "Breaking Bad" which I loved so it was a thrill to meet her.

That's all just me bragging and pretending that it's establishing context for this tweet that I'd like to respond to:

What's the tree you climbed as a child that you still think about?

I still think about the Easy Tree.

There were two prominent trees in our neighborhood in Southern New Jersey -- one that was tall and complicated and hard to climb because it was dangerous.

The other had big limbs, strong branches, and ample space that made it easy to climb. We of course called that the Easy Tree.

We climbed it almost every day.

One day we decided to build something in that tree. We might have had an elaborate tree house in mind although honestly we lacked the engineering or carpentry skills to pull that off. We didn't even have adequate tools. We used bricks to pound in the nails to hold the lumber. Bad idea.

It was not my brick, but it might as well have been because I felt so bad about what happened. One of the bricks slipped (predictably) out of the hands of one of us and landed on my brother Dave's head. There was a lot of blood.

We carried him home where my dad administered copious amounts of water and whatever magic that parents do to save their children's lives. There might well have been a trip to the doctor and stitches involved. (There were indeed stitches and my brother had a scar on his forehand after that, but he did make a complete and remarkably fast recovery.)

"Just like a boxer," I remember my granddad saying. "The head bleeds a lot."

The Easy Tree was never quite the same after that and I don't remember ever climbing it again. But I do think of it often and how very upset I was to see my brother hurt. I cried more than he did, and I was four years older than him.

Well, Ms. Hutchison -- that's the tree I think about. How about you?

Set a Reward for Yourself

Proposition: Goals are rewarding enough that we shouldn't need rewards for achieving them. Rebuttal: you'll feel better after the reward AND it will often spur you on when the going is rough. (PS: the going is usually rough.) How will you reward yourself when you achieve your biggest goal? Figure that out, and the goal gets easier. You deserve it. -- doug smith
Post a Comment
Read more

What do change and negotiation have in common? They are both: Asking people to change Easier planned than executed Subject to opposition  In today's edition of the Harvard Law School Program on Negotiation Sunday Minute , James Sebenius provides seven tips on how to handle a big negotiated deal that is falling apart or facing opposition. He states the Amazon decision to back out of an agreement to build a major business center in New York as an example. It seemed like a done-deal, (a meaningful change) and then it fell apart.  Change management efforts also frequently fall apart. That's frustrating and career-impacting for anyone involved in the change. Like a deal gone sour, a failed change project is agonizing. Here are seven tips from the article. I think that they are excellence advice for managing a major negation AND managing a change project: Never take success for granted in a complex, multiparty setting. Stay informed about local opinions regarding the issues invol
Post a Comment
Read more

Are you easily distracted? I've noticed that some of my more persistent distractions stop feeling like distractions when I do them too much. What becomes a habit is all too easily accepted.  And not all distractions are bad. Some powerfully creative ideas came from unexpected distractions -- drifts of thinking leading to novel approaches that worked. But living in distraction is dangerous.  Every distraction pulls us away from a noble goal.  When I feel that pull, I try to re-center myself and get back to the goal (or at least a goal.) The goal is where the gold is. -- doug smith
Post a Comment
Read more

The Significance of a Choice

When you have a choice, how do you decide? Do you consider the long-term impact? Do you think about the affect on other people?  Sometimes the significance of a choice emerges long after the choice is available. We learn later how important the choice was. What if we could figure that out before it was too late? -- doug smith
Post a Comment
Read more

The Quality of Your Goals

What do you do when you know that your feedback for someone on your team will be tough to hear? Before I learned better, I would sometimes just keep the feedback to myself. I didn't want to hurt anyone's feelings, after all. And they made it this far without that feedback so... But that's not the most compassionate approach. Withholding something that could make someone's life and performance better is not being sensitive, it's being ineffective. Tell them what's going on. Tell them what you are thinking. Offer your suggestions. It can still be kind. It can even be graceful. It might even contain a bit of humor. But it's best as feedback when it is clear and to the point. Prepare for that difficult feedback. You already know that there are right ways and wrong ways to deliver feedback. Plan, and practice. Get it right. Before you give feedback imagine how it would feel to hear that directed at you -- and then adjust accordingly. Be the boss y
Post a Comment
Read more

There will be plenty of obstacles between you and your goal -- no need to add doubt to the list. Never doubt, work it out. -- doug smith
Post a Comment
Read more