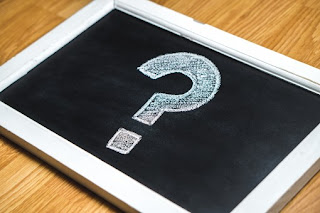 Do you like to argue? Whether or not YOU do, you probably can think of someone who seams to enjoy disagreeing. Arguments are contagious. I've gotten pulled into many arguments that eventually went nowhere and didn't contribute any progress to anything at all. So why argue?

It's harder to argue with a question.

And with a question, we both might learn something.

What have you learned today?

What are you missing?

Leaders make mistakes. Oh wow, do they make mistakes. At question is, are we learning from those mistakes? Can we manage our emotions? Do we redirect our misdirection? Do we serve instead of pander? Leadership is hard. That's why people are asking you to be in charge. Learning constantly will make it better, but it will always be hard. When it stops being hard, ask someone what is it that you're missing -- because you are definitely missing something. -- doug smith
Post a Comment
Read more

Let Them Have It

I say it a lot: "what gets appreciated gets repeated." When people please you, celebrate. When people meet your expectations, celebrate. Let people on your team know when they've done a good job. They're starving for that kind of attention. Let them have it. -- doug smith
Post a Comment
Read more

Your work environment has probably changed in the past two years. Mine certainly has. Have you used those changes as opportunities to make your work environment more conducive to the work you want to do? Do you have things arranged in ways that help you think, help you create, help you achieve your goals? You will benefit by designing an environment that supports your goals. Music...water...coffee...art...a notepad...? It's up to you, just like everything else. -- doug smith
Post a Comment
Read more

I like this quote about coaching, and I think it applies to much more than coaching. Maybe, just maybe, everything. Where does confidence come from? Well, you might be able to drum it up or talk yourself into it but that's shallow and not so resilient. True confidence comes form competence: knowing you can do what you say you will do, and doing it. It's reliability. It's sincerity. It's thousands of hours of practices and service. Phil Jackson had a lot of success in his career. His teams oozed confidence. And you know what? They were also really, really good. Build that confidence. Develop that competence. Learn constantly, every day. -- doug smith
Post a Comment
Read more

Sometimes a manager, with every good intention, will skip around the supervisor who reports to them and provide direction to a team member. The supervisor is cut out of the equation.  It's fast. It sometimes works. It always has side-effects. The main side-effect is that the next time that same team member has an issue or a problem, they will go around their supervisor and directly to the manager. Before you know it, the manager is supervising the employee and the supervisor is cut out. That's not what you want. That's not what the supervisor wants. And, that's not good for your team. I know that in today's world there are fewer levels of leadership. It makes sense that people should be able to talk, at any time, to anyone in the organization. Keep your doors open -- just remember, you probably don't want a parade of people two levels down marching thru. -- doug smith
Post a Comment
Read more

In lean staff times, in fully staffed times, in hard-to-find-the-talent times, we need to keep recruiting. Even when you don't have a hiring requisition, or an open position. Top talent doesn't always show up on schedule. Sometimes it peaks in thru the window. High performance leaders are always recruiting. Your next MVP is out there somewhere. Keep recruiting. Keep recruiting by: creating an environment where people want to work developing your people, no matter what stage of their career building diverse teams with all kinds of people saying positive things to people about your team smiling when you are asked about your team and about your goals Keep recruiting. -- doug smith
Post a Comment
Read more

Do you like to be micromanaged? I don't, and I don't know anyone who does like to be micromanaged. But I've learned that some people DO need it. Let's face it - some people will probably not get their work done on their own unless they are closely supervised. That doesn't make them bad people, but it does mean that they need supervision. They need attention. They need to be managed. It's not micromanagement if they won't get it done without your attention to detail. Help them help you: give them the management that they need. -- doug smith
Post a Comment
Read more

When turn-over is high, find out why. It's easy to blame the economy, and maybe that does have something to do with it. It is also easy to blame other exterior causes. If you can't fix those exterior causes, what can you do? Look inside. Turn-over means that someone who works FOR you would prefer to do something else. Turn-over means that the team has tension you're not addressing. People need to work someplace, but if they choose NOT to work for you, the thing you can change is you. Listen. Talk about it. Connect with everyone on your team more often. Fix processes. Pay fairly. There are so many things that you can do, and you do have to DO them. When turn-over is high, find out why -- and fix it. -- doug smith
Post a Comment
Read more