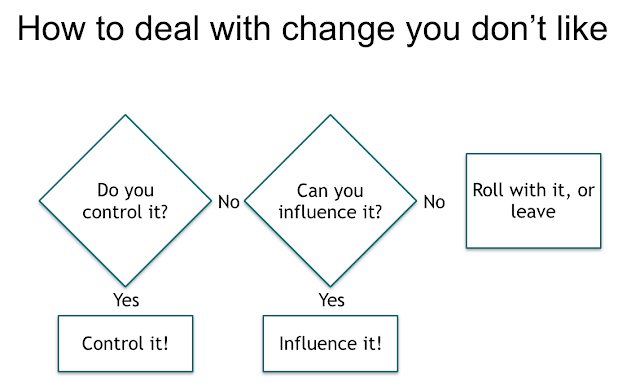 At one time or another (and probably MOST of the time) we resist change. It's causing us to do something differently and that is an effort we probably did not ask for. If it's not your idea, change is an aggravation.

I don't like it when my phone decides to upgrade. Every single new release for the past two years has been worse, not better than the previous one. And yet, I have no control over it other than to switch to another phone that will likely offer the same aggravation. My current choice is to get over it and move on.

If I control something, I make the changes that I want (most of the time.) New car? That's up to me. New coffee cup? Ditto. New client? That's in an area of influence, but not control.

That's why the flow chart I've created. Do you control it? Then do that.

Can you influence the change? Then get busy and build more influence.

If you cannot control OR influence a change you still have two choice. You can roll with -- or you can move on.

Any other worry about the change is simply wasted effort with zero benefit.

The next time you are offered a change, think about YOUR choices.