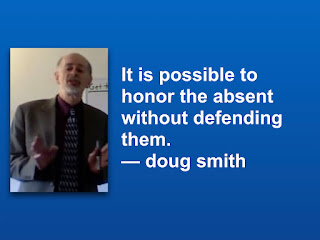 Do people in your organization gossip?

It's not harmless chatter. Gossip creates problems with reputations and generates disrespect. Without a person there to defend themselves, gossip is a poisonous mix of half-truth and hyperbole. It's bad stuff.

When I worked at GE we had a guideline that made perfect sense: honor the absent. If you wouldn't say something if someone was sitting right next to you, then do not say it. Honor their absence and their humanity.

Whether or not we agree with the goings-on and accounts of someone, if they are not there to defend themselves, maybe silence is the nobler path. Smearing them, swearing about them, and telling stories that are at least partially (and possibly, completely) untrue are behaviors that are beneath us. It's better to avoid gossip completely.

High performance leaders know that to communicate for results it pays to stick to the truth AND to respect the people involves. Respect your audience, respect your topic, respect the dignity of your organization.

It is possible to honor the absent without defending them. Tell your truth, without disparaging the reputation of someone not there to defend themselves.

What do you think?