How Is Your Toolbox? 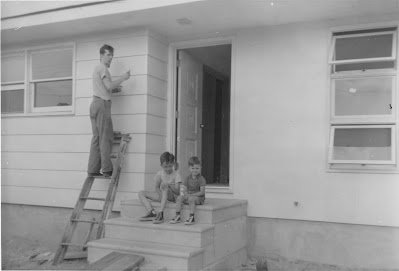 Do you rely on the same methods of work over and over again? Have you been using the same tools for years without reflecting on why?
My dad was a weekend woodworker. He worked in a glass factory as a supervisor most of his life, but he was also a skilled craftsmen. He even built our house. He didn't know everything about every craft, but he found ways to learn. He mainly learned by helping.
When the contracted plumber installed the plumbing in the house he was building, he helped the plumber.
When the electrician installed all of the wiring and circuits and kept everything up to code, my dad helped. He followed orders. He did the heavy lifting. He listened attentively. And, he helped. Not so that he could install plumbing or electricity in future houses (he never did) but so that he could FIX whatever malfunction occurred later in his own home.
He saw which tools he'd need. He learned how to think thru a problem. He found the boundaries of his knowledge so that he'd know when to ask for help.
The tool box kept growing.
It's been that way for me as a leader. I've never had everything I need to be a perfect leader. I never will. But I've followed on at least as many projects as I have lead. And each time I did the grunt work, pulled the heavy lifting, watched, listened and learned. Not to be the greatest leader of all time, but to learn what tools I'd need, to learn how to think thru a problem, and to find my own boundaries so I'd know when to ask for help.
Every leader needs a tool box of techniques to enable fast thinking and reasoned responses. How's your toolbox coming along?
-- doug smith

When was the last time that your integrity was tested? As leaders, we are often tempted to cut corners, to shave edges. A little compromise here or there, often in the interest of the bigger mission, seems justified. Who'll notice? What's the harm? Rounding out the numbers on a late night report for example. Or fudging that expense report just a little so that your best performer can get that invoice approved faster. Or, not confronting a clear case of harassment because the harasser is one of your friends. These are just small, inconsequential things, right? Wrong. Ethics may be open to both interpretation and circumstances, but one of our biggest problems these days is that the boundaries have blurred so far as to be indistinguishable. It feels like anything goes. That's no way to lead. That's no way to improve the world. Ethics, and integrity, matter as much as ever.  That means we have to pay attention. We as leaders must be careful, oh so very careful, of any com
Post a Comment
Read more

How successful would your team be if everyone on it worked as hard as you do? That's a question with more than one implication. Are you working hard enough to set a great example? Or, are you setting the bar so low that results suffer? The leader sets the example. The leader, as John Maxwell as said, "models the way." As leaders, let's model ways we'd like our team members to follow. Let's work hard. Let's work ethically. Let's work together. -- doug smith
Post a Comment
Read more

One of the benefits to growing older is the possibility of expanded perspective. Because things have changed so much, change doesn't seem so disruptive. Because we've experienced difficult times before, tough times seem more like the natural order of things rather than impending doomsday. For goodness sakes, having lived thru the daily fear of nuclear annihilation other problems pale in comparison. They're still serious, yet survivable. As leaders we owe our teams a sort of resilient perspective. Especially our younger team members, who have not lived thru crisis after crisis for decades on end and might hear their own doomsday clock ticking loud enough to deepen their anxiety. We can help with that, even when we can't solve every problem. For not every problem is solvable, at least not immediately, but given determination, science, and able leadership each generation can make life better.  I admire our youngest generations for their willingness to make things better.
Post a Comment
Read more

Do you like to give advice? I don't know how many times people have asked me for advice and in return I just let them hear what I had to say about what I thought they wanted to know. That has two big problems:  Maybe I haven't really understood their issue, and Maybe they aren't really ready for advice until they've thought it through By asking questions, I can learn more about their situation to find out if I even have advice worth sharing on that situation. Sometimes, they have all they need to solve the problem by themselves. Also, by asking questions and letting them think through the situation in greater detail, they can tell that I'm not just going to pull out a stock answer -- and the answer will come from our dialogue together, not some ready-supply of world wisdom. I'm smart, but I can't solve everyone's problem. How about this -- do you like to get advice? Asking for advice (without paying for it) can be an imposition. It can also be rude. It c
Post a Comment
Read more

How many times have you started over? Not a minor change, I mean completely started over? New job, new relationship, new car, new year? Starting over is tough, but necessary. It's aggravating, but essential. To get where we'd rather be we have to change where we are. Changing feels like leaving an old friend behind and that makes us drag our feet. Yet here we are, in constant unrelenting need to pick up our feet, to move on. It's good. Change gives us chance -- the chance to improve, to learn, to grow. How many times have we started over? Every day we're starting over. Let's start over in joy. Let's start over with learning, with growth, with new levels of understanding, understanding that we can't possibly know it all and that is fine. We just need to keep starting over.   -- doug smith
Post a Comment
Read more

Set Your Own Goals

Who sets your goals? Yes, there are goals we must achieve because we're in a job and because a boss sets them for us -- but those are just an entry ticket into the big game. The bigger game, the big picture, includes the goals we set for ourselves. Some people will understand that, and some will not. Be careful about letting anyone else judge your goals. They have their purpose, you have yours. Your goals are your business. -- doug smith
Post a Comment
Read more

Do you ever get discouraged trying to lead your team forward? I know, they give you challenges that annoy you. They forget what you've already taught them. They miss time after time after time. And yet, they also bring a smile to your face. They surprise you with an insight that goes far beyond anything you've ever taught. They connect with customers in ways that reflect how YOU feel. They also bring you joy. Up and down. Down and up. Leadership is one challenge after another, randomly peppered with joy. If leading was easy they wouldn't have to pay people for it. But if there weren't rewards far beyond the money, no one would do it. Leading is tough. Leadership is the best. -- doug smith
Post a Comment
Read more

Every leader is also a trainer. You either train well or lose ground. High performance leaders train their team members. Coach the skills, develop the bond, build your team. It will make you a more effective leader. -- doug smith
Post a Comment
Read more

Imagine The Best Leader Ever

Help Before You Need Help

Why should anyone help you with your goals? You can probably think of at least three people right now who are not yet helping you, but if they did, would make achieving your goal much easier. You might even be able to think of some people who seem to be standing in your way of achieving your goals. Why would they do that? How do people decide whether or not to help? People have their own sense of reason, but one thing that influences them is whether or not they have gotten help from you. When we build relationships of trust and serving it becomes much easier for someone to offer help. It even becomes easier for them to see the need to offer help without being asked. But if there is no history of helping, if in fact there is a memory of an unpleasant lack of help, it's natural that they would resist offering help of their own. It's all in the history of the relationship. People can help us achieve our goals or they can hinder us -- it could depend on how well we serve those peop
Post a Comment
Read more